Emily Hyland, co-founder of Emmy Squared pizzeria in Atlanta’s Glenwood Park, serves one of the most unusual versions, the Huge Hot Chicken Wedge. “I am a huge wedge salad kind of girl,” she told us, “so we had fun amplifying the flavor profile of this dish by using two types of dressing — our tangy ‘Bama white sauce and our homemade herby buttermilk ranch — and then finishing the salad with a stack of our signature Nashville hot chicken.”

As executive chef at both Haven and Arnette’s Chop House, Stephen Herman faced the challenge of creating wedge salads for each. He shared his recipe for the version served at Arnette’s and told us, “For Arnette’s, I wanted to do something more like a traditional steakhouse wedge while incorporating things from our restaurant, like the hearth-roasted tomatoes, which pick up some smoke, and Fourme d’Ambert, a delicious smoky French blue cheese. The pickled onions give the salad a nice balance.”

Chef Tony Manns at C&S Seafood and Oyster Bar in Sandy Springs added nuts and seeds for crunch to his Baby Gem Lettuce Wedge Salad using Sweet Grass Dairy’s Asher Blue. He says one of the things that makes the salad so delicious is that you get all these flavors — Green Goddess dressing, Asher Blue, and soft herbs — in one bite, “It’s like a bite of pie.”

At 5Church, they swapped the iceberg for Little Gem lettuce. Chef Mark Alba says Little Gem lettuce is like a cross between iceberg and romaine. For the traditional accompaniments of blue cheese, bacon and tomatoes, he says, “We use creamy Gorgonzola Dolce imported from Italy, we cure our bacon in-house, and we use farmhouse heirloom cherry tomatoes that have such a burst of sweetness.”

At the Iberian Pig, executive chef Josue Pena added Spanish influence to the wedge. “I put a spin on a wedge salad with some Spanish influences like adding serrano ham and our charcuterie crumble, and then taking advantage of great local products like farmer Bobby Britt’s lettuce and tomatoes and Shakerag Blue from Sequatchie Cove Creamery in Tennessee.”

Joey Ward, chef and owner of Southern Belle, offers an off-the-menu wedge — grilled Little Gem lettuce with pickled tomatoes, shaved red onion, Bagna Cauda and fresh feta — that he created to use traditional wedge ingredients in a different way. “Grilling the Little Gem lettuce adds a smokiness and tremendous depth of flavor to the lettuce, which is usually just used as a vessel for the dressing and toppings. Bagna Cauda takes the place for the dressing and adds a meatiness from the anchovies that replaces the traditional bacon. Pickling the tomatoes adds a bright burst of acidity while the feta (which stands in for traditional blue cheese) keeps the dish lighter for summer.”

Hampton + Hudson co-founder Jenn Streck sees their Wood Grilled Caesar Wedge as a takeoff of the classic Caesar salad, incorporating brown butter-thyme croutons and fried capers for an unusual presentation and a salad with lots of added crunch.

And King + Duke executive chef Eddie Barrett offers a hearth-roasted spring green salad on his menu that’s topped with whipped buttermilk. “When creating this dish, I wanted to make something that was eye-catching and different but also tasted like a bunch of my childhood memories. We used to whip fresh cream and eat it on just about everything. I also had an obsession with ranch dressing, so this salad is a bit of an homage to that.”

It’s time to put a wedge salad back on the menu at home. 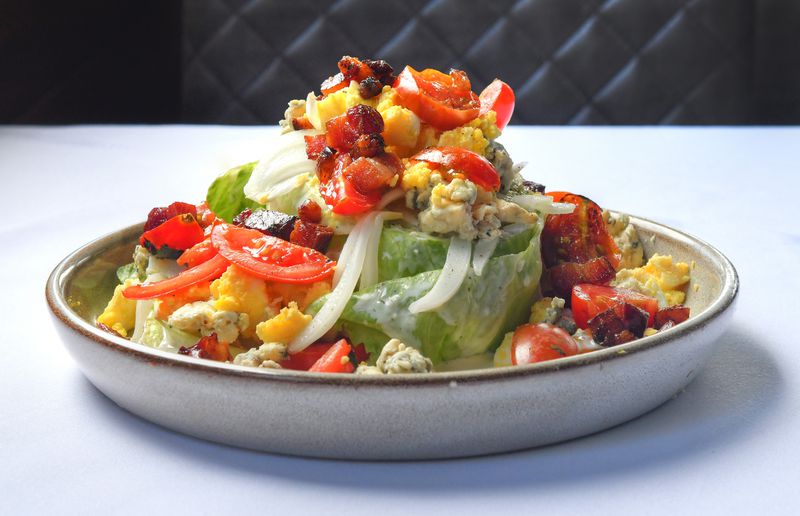 When Stephen Herman, executive chef at Arnette’s Chop Shop, sent over his wedge salad recipe, he was very clear in naming the ingredients to be used in re-creating his recipe. Not just any blue cheese, but Fourme d’Ambert, which is often available at the Murray’s Cheese counter in your local Kroger. Not just any bacon, but either D’Artagnan, Neuske’s or Benton’s. For the mayonnaise, it’s got to be Duke’s. The buttermilk? From Southern Swiss Dairy in Waynesboro. And the cherry tomatoes should be an heirloom variety, just now becoming available from local farmers.

The resulting salad has the classic wedge flavors but using top-of-the-line ingredients. If you can’t find baby iceberg lettuce, substitute the traditional quarter wedge. And at the restaurant, they roast their cherry tomatoes on the hearth where they cook their steaks. We’ve adapted the recipe to take advantage of the skillet used to cook the bacon.

Heat a medium skillet over medium-high heat. Slice bacon into 1/4-inch strips and cook strips in hot skillet until bacon is crisp, about 5 minutes, turning as needed. When bacon is crisp, remove from skillet and drain on paper towels. Set aside and discard bacon fat but do not rinse skillet.

In the same skillet over medium-high heat, add the cherry tomato halves and cook, stirring constantly, just until tomatoes begin to char, about 4 minutes. Remove from skillet and set aside with bacon. 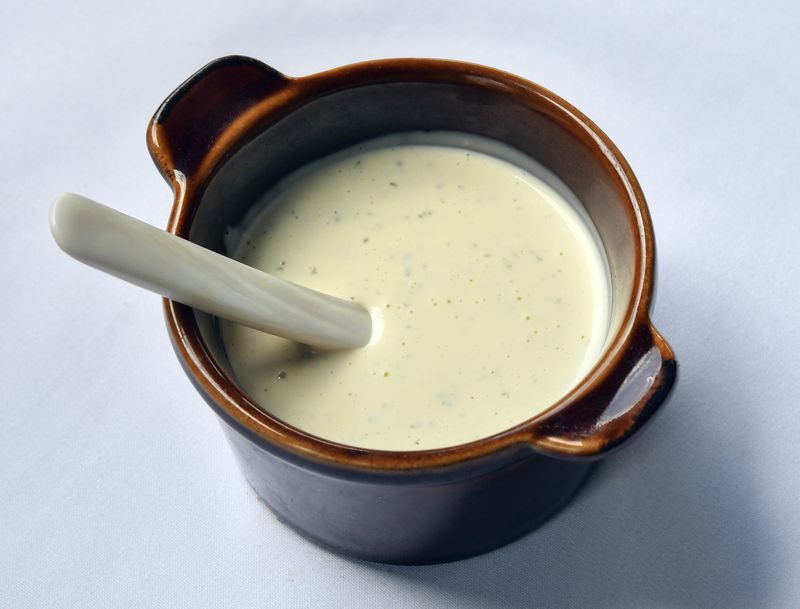 To make jalapeno vinegar, put a jalapeno (or several, depending on how hot you want your vinegar) in a canning jar and cover with white vinegar. Let rest at least 4 days before using. Strain the jalapeno(s) when the vinegar has reached your desired heat level and flavor. The resulting vinegar will keep for months.

Zest and juice of 1 lemon

In a medium bowl, whisk together buttermilk, sour cream and mayonnaise until smooth. Fold in dill, shallot, garlic, lemon zest and lemon juice, jalapeno vinegar and celery seed. Add chopped parsley and chives and stir again. Season to taste. Keep refrigerated until ready to use. In a nonmetallic container, combine onion, vinegar and pickling spice. Make sure onion is covered, adding more vinegar if needed. Allow onions to sit at least 1 hour before using. May be made up to 4 days in advance. Drain onions before using and remove any pickling spice clinging to the slices. Onions will keep, refrigerated, indefinitely, growing more tart as they sit. The Burgess Wedge Salad from Fia. (Styling by chef Matt Meacham / Chris Hunt for the AJC)

This version of a wedge salad rethinks two traditional ingredients — blue cheese and tomatoes — and instead of using a blue cheese dressing, is dressed with a vinaigrette flavored with Old Bay seasoning. That may not be a traditional seasoning used in a wedge salad, but it turns out to be a very complementary flavor.

The restaurant also makes candied pecans to garnish the salad and adds a flourish of baby sorrel leaves and pea tendrils.

Heat a medium skillet over medium-high heat. Slice bacon into 1/4-inch strips and cook in hot skillet until bacon is crisp, about 5 minutes, turning as needed. When bacon is ready, remove from skillet and drain on paper towels. Set cooked bacon aside and discard bacon fat.

When ready to serve, arrange lettuce on serving plate. Drizzle with Old Bay Vinaigrette and Blue Cheese Mousse. Sprinkle with chopped chives and reserved bacon. Sprinkle with salt and pepper and add crumbled blue cheese. Scoop the pesto into a mound and place on the side of the salad. Serve immediately. 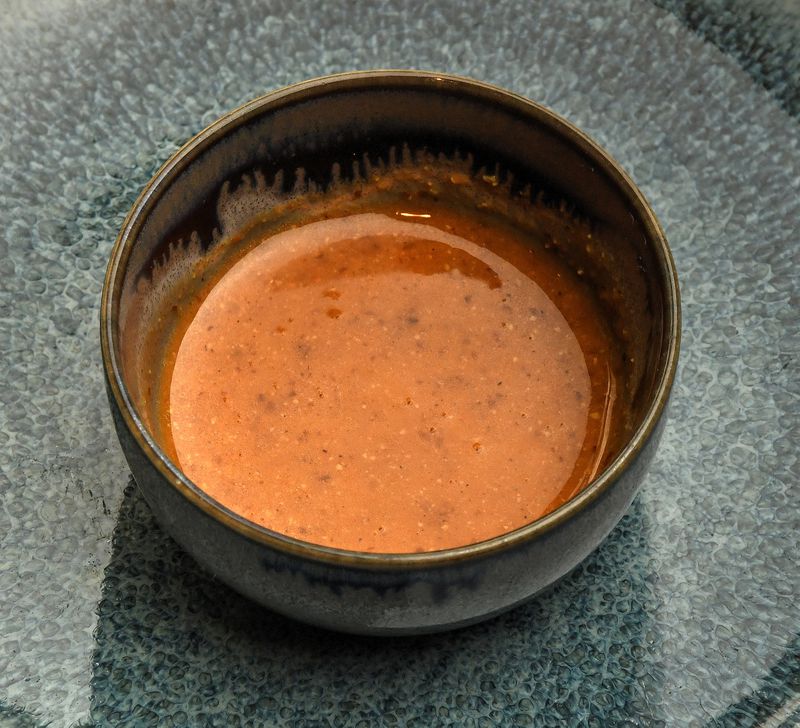 Old Bay Vinaigrette is one of the elements of the Burgess Wedge Salad from Fia. (Styling by chef Matt Meacham / Chris Hunt for the AJC)

In a large bowl, whisk together vinegar, olive oil, mustard, shallots, Old Bay Seasoning and salt. Taste for seasoning. Pour into a container and cover. Keep refrigerated until ready to use. When ready to use, bring vinaigrette to room temperature. 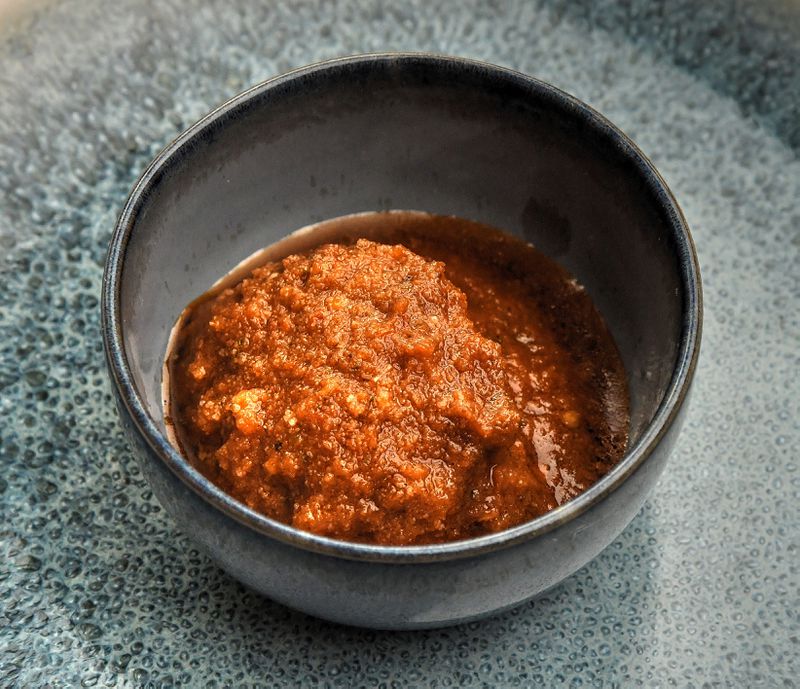 Sun-Dried Tomato Pesto, one of the elements of the Burgess Wedge Salad from Fia, should be placed on the side of the salad. (Styling by chef Matt Meacham / Chris Hunt for the AJC)

This recipe will make more than you need for a few wedge salads, but we are finding ourselves enjoying it as a spread for sandwiches, stirring it into hot pasta that includes seafood or chicken and adding it as a topping to a toasted bagel with cream cheese. Try to find “ready-to-eat” sun-dried tomatoes when you make this pesto. The strips of tomato should be soft enough to blend easily. Even so, the ready-to-eat versions may be a little tough to puree. We had the best luck when we soaked those sun-dried tomato strips in the olive oil and vinegar before blending and we added that step to the restaurant’s recipe.

The pesto will thicken upon standing, allowing you to scoop it to serve with the salad (or spread on a sandwich).

In a small bowl, combine sun-dried tomatoes, olive oil and vinegar. Let sit until tomatoes are thoroughly softened. Can be done up to a day in advance.

When ready to make pesto, in the jar of a blender, combine sun-dried tomato mixture with walnuts and process until smooth. Add rosemary, coriander, fennel, salt and Korean chile flakes and blend one more time. Taste for seasoning. 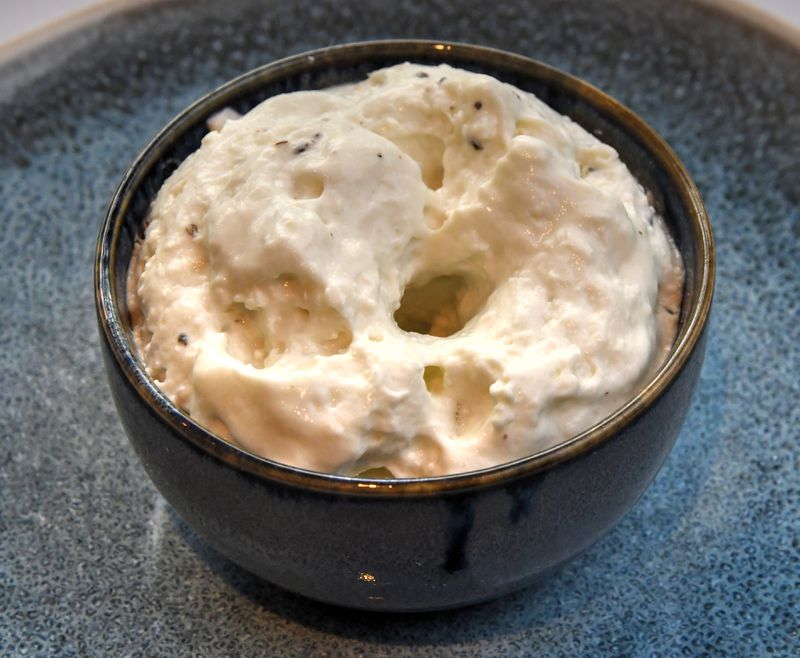 Blue Cheese Mousse is drizzled on the Burgess Wedge Salad from Fia. (Styling by chef Matt Meacham / Chris Hunt for the AJC)

Whoever thought of making savory whipped cream? A chef, of course. This is an unusual presentation for the traditional blue cheese on the wedge, and worth the extra steps involved in making it.

Put cream in a 2-cup microwave-proof container and warm for 20 seconds. Add blue cheese and buttermilk and combine until smooth. Fold in lemon juice, salt and pepper. Taste for seasoning. Cool and refrigerate in a covered container.

When ready to serve, put chilled mixture in a medium bowl and whip until it forms stiff peaks. Keep cold until used.